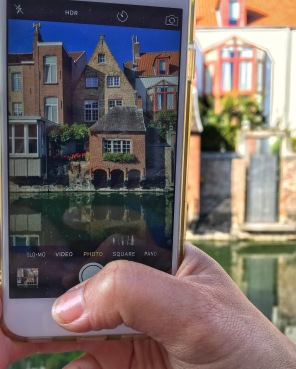 When we first moved to the UK, kid and care free, a time when any discussion about an uninterrupted eight hours of sleep did not begin with the phrase “Remember when…”, we talked about how London’s proximity to the Continent would allow us to zip over to Paris for the day, enjoy some fine French cuisine and make it back to London  before the Eurostar turned into a pumpkin.  Regrettably and unfathomably, we squandered our opportunity to execute such a trip, and over a decade and three kids later, I can barely go to the toilet without a child joining me, let alone Paris.

But wait! Could there be a family-friendly trip equivalent to compensate for the missed opportunities of our pre-child days?!  Well, no, of course not.  So instead we packed up the car and headed to Belgium for the day…a somewhat aggressive endeavor and a poor substitute for steak tartare and a few bottles of Burgundy sans enfants.  But a driving day trip to Bruges, Belgium with three kids…so much family fun to be had! Uh..right?

My first misgiving hit me as soon as my alarm went off at 5:30am. “I could still be sleeping. I’ve voluntarily woken myself up. Why have I done this?” I consoled myself with the fact that our friends, who also have three children and were driving to Belgium as well, lived further away from the Eurotunnel in Folkestone and were likely feeling even more miserable than I was, having gotten 20 minutes less of sleep (I hoped). Ha! I had cheered myself up. And as my head cleared and the caffeine from my first cup of coffee kicked in, I was starting to get excited about the drive ahead.  We bundled our three groggy kids into the back seat of the car (our road trip clearly an exception to the cardinal rule of “never wake a sleeping child”), stuffed buttered toast into their mouths and off we went! 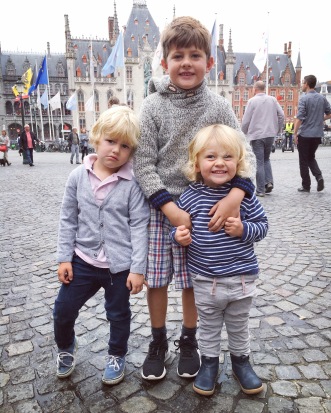 Almost everyone is happy to be in Bruges

With the London streets absent of cars, most people having had enough sense (or beer) to remain in bed at such an early hour on a Saturday morning, we made it to the Eurotunnel in just over an hour.  We checked in, drove onto the train (typically the highlight of our kids’ day) and were whisked under the English Channel for the 35 minute journey to Calais.  An equally uneventful and traffic-free morning in France and Belgium facilitated an arrival in Bruges, our first destination, in less than 1.5 hours.  After connecting with our friends, the group wandered Bruges’ meandering medieval streets (stroller-less, of course), the kids oblivious to their magnificent architectural surroundings and the parents only sporadically able to appreciate them, between tracking the kids and taking bets on which child was most likely to get hit by a bicycle first. When the children’s cheerful yelps mutated into whines and tears, we knew it was time for lunch. 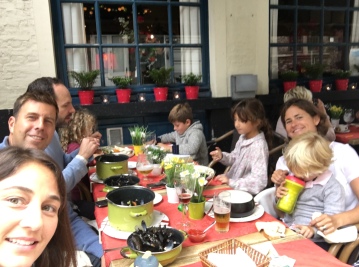 Now choosing a restaurant with 10 people, six of whom are kids under the age of nine, presents strategic challenges that do not exist when only adults eat out.  First, the list of requirements is much longer with six children and almost always includes an informal assessment of whether the group will even be welcome at the chosen restaurant.  After a quick recon of the area, made quicker by the increasingly loud groans of “I’m soooo hungry”, we narrowed our unsuspecting target down to a casual looking bistro called Beethoven on a square a few streets off the Grote Markt, with only a few occupied tables. After confirming, with a somewhat apprehensive waitress, that we could completely re-arrange their outdoor seating to cobble together, in tetris-like fashion, a table that could seat 10, we herded the kids to their seats.  I furtively  made eye contact with a patron seated nearby, the apologetic look on my face silently confirming the fact that we were about to ruin his peaceful lunch, and his return glare conveying a complete absence of empathy. 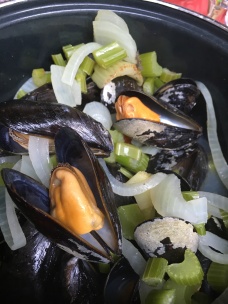 The lunch itself was a chaotic blur, but I recall that the food was surprisingly good; good food not being a top priority when “dining” with six children.  Harry and Hatcher both tried a mussel from my order of moules frites, Harry assuring me he loved it  with an enthusiastic thumbs up, while simultaneously gagging as he struggled to swallow. Huxley seemed content alternating between dipping his frites into ketchup and mayo, a meal I therefore considered to involve more than one of the four food groups.  No glasses were broken, no drinks were spilled and nobody was stabbed with a utensil.

Following lunch, in an act of supreme selflessness, the dads volunteered to patiently wait at a canal-side café in Jan van Eyck Platz with a couple of Trappist beers, while the moms took the six kids to the Chocolate Museum.  In my opinion a win-win situation for everyone although a bit unfair that the moms got to go to the Chocolate Museum.  We agreed that they should make it up to us later as we happily snacked on the chocolate that they had bought.

Thus ended our day in Bruges, and I couldn’t help but think, as I was contentedly pushing my youngest son in the stroller carrying the dead weight of my dozing youngest son in my arms, that the day had been a success.

But our day in Belgium wasn’t over, and we piled into the car and headed out to our next Belgian destination- the beach town of of De Haan.