“Wildcard trip”: A side trip, typically spontaneous, that deviates from the planned itinerary.

With early evening approaching and over six hours left until our Eurotunnel crossing back to the UK at 10:20pm, it was decision time.  We could continue our tour of Bruges and eat another three kilos of frites washed down with some strong Belgian beer while the kids devoured their purchases from the Chocolate Museum.  Or, alternatively, we could head to the seaside town of De Haan, which was a manageable 25 minute drive.  Tiring out the kids at the beach was an appealing prospect but it was, as I sagely pointed out, nothing that a couple of spoonfuls of NyQuil could not also accomplish, and in significantly less time.  Surely an extra beer or two at a rustic canal-side café would be as equally as enjoyable for the kids as for the adults?  But having a late-night drive back to London to consider and the fact that our friends thought I was joking about the NyQuil (I wasn’t), responsible parenting prevailed over fun (i.e., reality triumphed over fantasy) and we opted for the De Haan excursion.  So with an indifferent “sure, I’m good with whatever” masking my crushing disappointment, we headed to the car.

However, with the sun breaking through the grey clouds that had dominated the Bruges skies all day, I had to acknowledge that the beach trip might not be a bad idea.  That said, nothing required me to acknowledge this out loud, thereby preserving my ability to complain at a later time.

The drive from Bruges was a short, but picturesque one, and with enough grazing cattle and sheep to keep Huxley fully entertained for the entirety of the trip.  You would think he had spotted Peppa Pig herself the way he shrieked with delight every 30 seconds as we passed another grassy green field filled with livestock.  We rolled into De Haan at around 5:45pm, found some convenient beach-side parking and piled out of the car.  Harry, Hatcher and the other kids made a beeline to the pirate ship playground on the beach and Catherine made a beeline to the store for a few cans of Jupiler beer; everyone having their priorities in order. 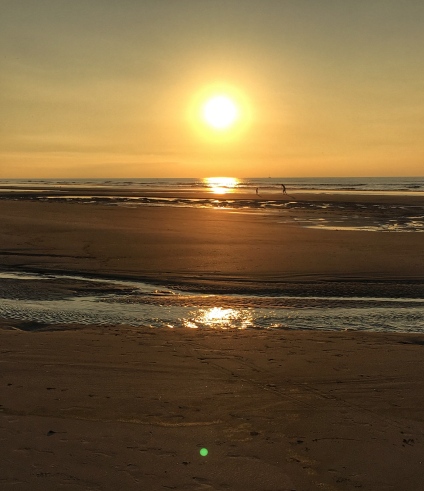 The tide was out and the beach was dotted with sandy tide pools stretching for hundreds of feet.  The sun was shining brightly and the temperature had risen enough that I shed my sweater. Things were looking good.  After a while, the six kids, either detecting adult contentment or growing bored with dry land, surged towards the tidal pools like the Serengeti wildebeest migration.  What started as tentative toe dipping turned into more confident wading (with trousers rolled up…sort of) and quickly culminated in a fully clothed free-for-all soaking where no child was left dry.

With the kids all happily playing in the distance, the adults were left in peace to reflect on the day as the sun slowly dipped behind the English Channel.  For all the chaos of the day we were rewarded with an incredible sunset at the beach on a warm Autumn evening and 90 minutes of kid-free conversation. “We sat and drank with the sun on our shoulders and felt like free men. Hell, we could have been tarring the roof of one of our own houses. We were the Lords of all Creation“ –  Red

There must be a term for when something really good happens and erases the memory of all of the bad things that happened immediately prior. Selective amnesia maybe? Whatever that term is, that is what happened this evening.

“Did any of the kids even cry today?…I don’t think so”
“And nobody misbehaved as far as I can remember”
“The kids must be so energetic because of the healthy lunch they ate”
“Matt you look really slim in those jeans, are you sure you ate three orders of fries at lunch?”
“See, I told you guys the beach was a great idea”

And in my mind I HAD told them…and I was right.

Posing or huddling together for warmth?

But just like that the calmness was shattered as the kids, with moans and whines echoing from De Haan to Dover, let us know they were simultaneously cold, hungry, wet, dry, sandy, tired and thirsty.  Oh well. After we changed them into the extra sets of dry clothes Catherine had sensibly packed (nice one Catherine!) we only had time for a quick dinner.  So we chose a simple looking Friterie right off the beach, just in case our kids had forgotten what fried food tasted like in the last six hours.  We were the only group sitting at the outside tables and may have been the only people to ever sit at this Friterie …or eat at this place sober.  While it’s hard to go wrong with fries, I would guess this establishment was a at least couple years out from achieving its first Michelin star.  Although their burgers were very Michelin-esque in the sense that  they tasted like rubber.  But “the kids were happy” which really seems to be the gold standard of multi-child family travel.

Well, I broke my leg and punctured a lung, but the kids were happy, so overall a great trip.

We ordered a few baskets of frites for the table and what the waiter claimed to be chicken fingers, but really could have been actual fingers or some types of edible or non-edible deep fried animal parts.  The kids ate them and are still alive today, so I guess it worked out.  We thanked the waiter for the wonderful meal, paid and headed to the car, readying the car sickness bags in anticipation of retribution from our gourmet fried dinner.

The beach, salt air, exercise and the heavy fried food worked its magic, with the kids passing out within minutes of departing De Haan.  With the kids sound asleep, we were unfazed by our one hour delay at the Eurotunnel terminal in Calais and chatted about how easy it was to do a day trip to Belgium.  “Do we have a free day next weekend? Day trip to Spain next?”  We made it back to London before midnight and seamlessly transferred our exhausted children into their awaiting beds, reveling in our successful trip.  And to anyone who asked what we did over the weekend we told them “oh not too much…we went to Belgium…for the day”.