Does your idea of our Driving Dad roadtrips include images of our family merrily driving along the motorway, admiring the views, creating lasting memories and happily munching on carrot sticks and organic, free-range, gluten-free kale chips while we sing  the theme song to Growing Pains?  If so, this revelation may a bit of a shock to you…sometimes driving really sucks. 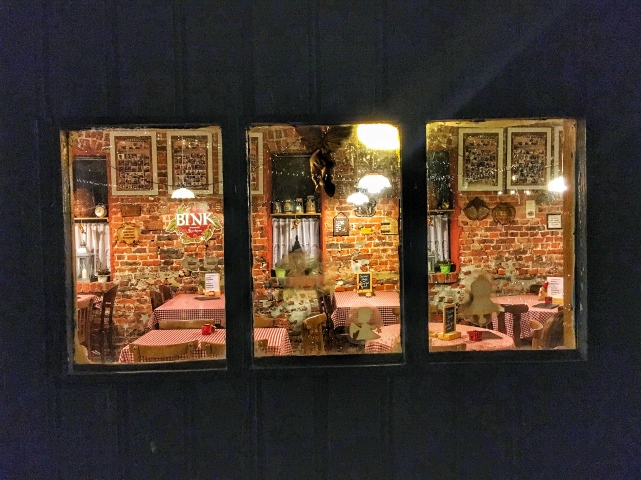 Ahhh, Christmas.  My favourite time of the year. For the past few Christmas seasons we have packed up the car and headed to the Christmas markets in Germany.  Christmas lights, gluhwein, gingerbread, singing and snow.  This year we had a relatively short drive of 3 hours and 45 minutes (from Calais, France) to Monschau, Germany, which is just over the Belgian border.  So we decided to make a quick, festive stop in Belgium on the way…somewhere that I thought would be fun for not just me, but the for entire family…a brewery.  The plan was to meet our friends at the Kerkom Brewery in the Flanders region of Belgium for dinner and a few Belgian beers.  Alas, the traffic Grinch was out to disrupt our trip from the outset.  The first snag came as we were leaving London…a traffic accident in the Blackwall Tunnel, our main route out of London, which resulted in a 45 minute standstill. Then, after a successful Eurotunnel crossing and with images of a nice, dark Belgian Dubbel and a plate of frites firmly etched in my subconscious, we hit what Catherine would describe as “ a bit of traffic” and what I would describe as “mind-numbingly painful, world-ending, tear-inducing rush hour traffic”.  In an attempt to re-route our course to avoid the traffic, chaos ensued… I vividly recall the discussion as follows:

Catherine: Oops, I forgot to tell you that we were meant to go left back there.
Me: Don’t worry, everyone makes mistakes sometimes *heart emoji*.
Catherine:  It looks like 35 minutes have been added to our journey…
Me: That’s just an extra 35 minutes we get to spend together as a family *two heart emojis*.  Can you pass the kale chips please?
Catherine: *starts singing* As long as we got each other, we got the world sittin’ right in our hands…
Entire family: *joins in singing*

However, deeply suppressed memories subsequently emerged in the following weeks reflecting a slightly different conversation…I’m still not sure which represents reality so choose your favourite:

Inhale, exhale, repeat…We soon recovered and after a few deep breathing exercises, strategic, focussed GPS re-routing and the smooth sounds of Usher over the radio, we continued our journey to the brewery which, as Catherine correctly predicted would “still be standing and still be serving beer, even if we were a few minutes late.”

Kerkom Brewery itself was exactly as I had hoped: a red brick farmhouse brewery dating from 1878 that could not have been more welcoming on a frigid December night. There was a serious-looking, five foot high wood burning stove in the center of the pub area of the brewery that must have been as old as the brewery itself.  The menu consisted of  hearty winter fare and the waitress, who spoke only Flemish (well, to us at least), was openly unimpressed with our friend Dave’s fairly flawless French.  We ordered food – or rather the waitress told us in Flemish what we were going to have – as we sat there nodding in agreement to what sounded a bit like a minute of somebody clearing their throat. We were more assertive and successful in ordering the beer…mainly because there were pictures.  The beers themselves were great., particularly the seasonal Winterkoninkske (Winter King) Christmas beer which, at 8.5% alcohol, ruled me out of driving the last leg of the journey (thanks Catherine). Belgian cheese stuffed meatballs and a rich, meat stew arrived shortly after, a particularly pleasant surprise as I was convinced the waitress had signed us up for the chicken carpaccio tourist special. 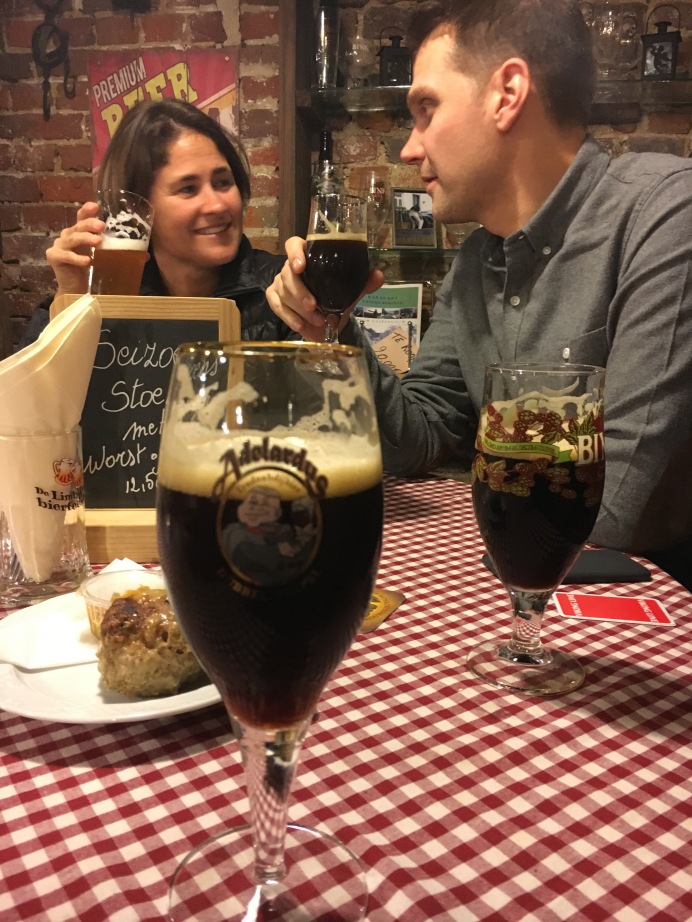 At least Catherine was impressed with Dave’s french.

So all is well that ends well.  I drank the last bit of my beer, handed the car keys to Catherine with a look that said “I told you that being a bit late wasn’t a big deal” and we were on our way…another successful roadtrip pitstop.

One thought on “Kerkom Brewery – Flanders”